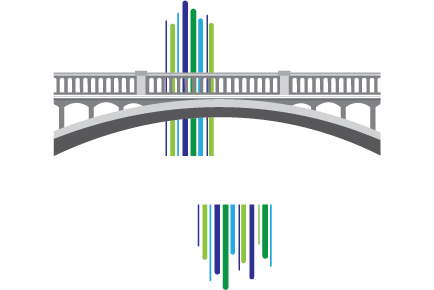 named after the builder, simon Benson

Benson Bridge is the footbridge that traverses Multnomah Creek between the two cascades of Multnomah Falls. The bridge was proposed by Samuel Lancaster who was a lead engineer and architect for the Columbia River Highway. One day while out at the site with Simon Benson Lancaster remarked to the wealthy Portland lumberman and good roads enthusiast, that it would “be nice if there were a footbridge across the lower waterfall, with a path up to and across it so that visitors could…look up at that magnificent waterfall above, then without moving look down on the lower one into the pool below.” Benson asked what it might cost, and Lancaster calculated the figures on the back of an envelope. Benson then wrote out a check for the amount and directed Lancaster to build it. The resulting footbridge is a 45′-0″ reinforced-concrete deck arch, 105′ above the lower Multnomah Falls. The location provides a spectacular view of the upper falls. Benson later purchased nearly 1,000 acres along the Columbia River, including 140 acres around Multnomah Falls which he gave to Portland for a city park. The bridge that bears his name has served as a distinguishing characteristic of the falls since it was built in 1914 by the Pacific Bridge Company of Portland Oregon, Robert Ringer Subcontractor. The bridge was designed by K.P. Biller, engineer with the Oregon State Highway Department.

Robert Ringer, the subcontractor, wrote that, “the bridge had to be built 135 feet in the air above the base of operations at the foot of the lower falls. It was straight up a rocky cliff” he added with, “water dashing over one side of it. It was a wild tangle of Nature and we had to climb on our hands and knees to reach the building site. We installed an aerial trolley operated by horses to put up all the materials.” He fashioned
a simple a wooden trussed arch bridge to suspend the formwork for the footbridge.

Ringer added, “one day when the job was nearly completed, Mr. Benson Jr. (Amos S. Benson) visited us; and I asked him if it would be all right if I put my name on the bridge in the concrete as is done on famous projects. He readily gave assent.” But, “when the bridge was completed, Mr. Benson, some friends, and the engineer of the Pacific Bridge Co. visited the site and we had a general jollification and everybody was happy except the bridge company engineer.” The company representative “concealed his wrath from the guests, but he was furious to see my name on the bridge. After all, I was only a sub-contractor.” Ringer had not yet been paid for his work and to assuage the engineer’s anger he agreed, “without any fussing to cement over the offensive letters.” But when he “was alone and attending to the last chores. (He) cleaned up the lettering and smeared it lightly with wet clay–to which cement will not adhere permanently–and carefully troweled the place over to match the rest of the deck.” Ringer did not again visit Multnomah Falls and the footbridge for two years. By that time the winter frosts had done their work and routed out the inscription, which reads, “R. L. Ringer, 1914.”